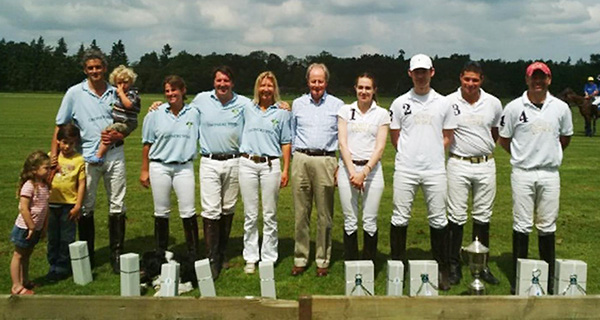 Purity Lift their third trophy in a row.
It was a slow start for both teams with neither team scoring in the 1st chukka but then Purity hit their stride. Pedro de Lamare scored 3 goals in the second to give them a healthy lead and although Drop More Wine with Toby Pekjovic continued to fight, another 3 in the last chukka from Purity team members made it a convincing win. Drop More Wine did admit they were slightly the worse for wear after a very social Saturday night, but also admitted that Purity are a very strong team to come up against. Purity’s Helene Wetje was particularly pleased with their success as her parents who had flown in from Sweden and were sitting in the crowd to witness their victory. Best Playing Pony went to Pedro’s mare – Florentina played in the 2nd chukka, and MVP went to Sam Buckles from Drop More Wine.

Asian Art were the runaway winners of the subsidiary final with all team members getting a piece of the action and playing well on their handicaps. 3 Goals a chukka from team Asian Art made the score line 9 vs 1 by the end of the third against Green Point, making it near impossible for Green Point to come back. They did keep fighting though, with Clive Posselt scoring a lovely field goal and JJ Sparks another, but Asian Art’s professional Sergio Baselli replied with another 2 goals for his team, securing the victory. MVP went to Asian Art’s Nell Jacob

A different story played out in the sub subsidiary game with both teams going goal for goal and making it a very close match. Adderbury’s team make up of four 0 Goal players made for a very even team but Phillip Elliott kept control and with the back up of club Chairman Michael Mylonas, they managed to have Team Wild Cats in front when the final hooter went. MVP went to Wild Cat’s Phillip Elliott.